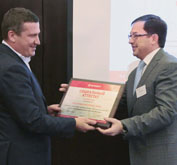 Khartsyzsk Pipe Works was recognised the best among Metinvest Group's enterprises for its 2013 Workers' Amenities program. The plant's appraisal followed two comprehensive audits this year in April and September

The audits provided opportunities to assess changes and define priorities for future improvement in terms of employees' working conditions and amenities. The other contenders were Northern GOK, Azovstal and Ingulets GOK.

Khartsyzsk Pipe placed special emphasis on organizing adequate amenities for its workers. Sixteen lavatories in six subdivisions of the enterprise were remodelled, repairs to the bathrooms in the main laboratory and in the canteen of Pipe Welding Shop #4 was completed as part of  Workers' Amenities program in 2013. Currently, repairs are underway in eight sanitary rooms. The remodelling of the bathrooms and canteens in the Mechanic Engineering Shop and Railway Shop are scheduled for next year.

"It's good that Khartsyzsk Pipe is again on a list of leaders. This time it is among the leaders in improving workers' amenities," said Pavel Uzbek, general director of Khartsyzsk Pipe. "People are the main capital and key resource of development for Khartsyzsk Pipe.  It's important that workers enjoy going to work. Therefore, our goal is not only to make their workplaces safe, but to create comfortable amenities for them."

The program to improve workers' amenities has been implemented at all enterprises of Metinvest Group since 2012. The company is upgrading administrative facilities and amenities, bathrooms, canteens, toilets and shower rooms step by step. Over 1,000 amenities facilities have been repaired at the enterprises of Metinvest Group over the last two years as part of Workers' Amenities program. The company invested over UAH 3 million this year to improve the labor conditions of Khartsyzsk Pipe employees.

The leaders were recognized at an extended Executive Committee meeting of Metinvest Group in Donetsk. Certificates for best performance in organizing and improving workers' amenities were given to the enterprise's directors by Metinvest Group CEO Igor Syry and HR and Social Policy Director Nataliya Strelkova.