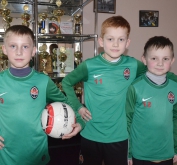 In so difficult time for the whole Donetsk region the Football School of Khartsyzsk for Children and Young People (branch of the football academy "Shakhtar") continues to train young players. Financing of the school is provided by KHARTSYZSK PIPE PLANT. Not long ago the children who moved to the town due to the military operations became the members of the football section.

New trainees of the school are 12 in-migrating children from 1998 to 2008 years of birth. Little in-migrants fromDonetsk,Gorlovka, Amvrosievka have already mastered football skills in halls of the Sports Complex “Trubnik” of KHARTSYZSK PIPE PLANT. The best trainers of the town help the children to learn the ropes and tricks of sport.

“At the beginning the children were unconfident and timid because they became witnesses of awful events which took place in their cities. They were frightened, unsociable children. We were assigned a difficult task – to distract them, introduce sport to kids. We cope with it. Our boys-sportsmen admitted beginners to their groups with pleasure”, Sergey Parashchenko, the football coach, has said.

KHARTSYZSK PIPE PLANT promotes development of young sports talents: optimum conditions for trainings are created in the Sports Complex “Trubnik” and classes for all children are absolutely free of charge. As of today nearly 140 young players train at the football school, 5 qualified trainers conduct training. Besides, the experimental group "nursery", in which children of 2011 year of birth train, was opened in the football section.

In addition to sport skills trainers-teachers develop such features of the trainees as courage and resoluteness, diligence and will to victory. Football training helps to live an active and eventful life, teaches kids self-discipline and team spirit. Football develops combativity that is essential in life.

“We believe that someone of our trainees will become a star of the football world in future. We exert best efforts to do this. It's pleasant to see that our boys are so passionate about this kind of sport. Many of them continued to attend training even in such difficult time. We have nice, hard-working and motivated guys. And this is the main thing in success achieving”, Vladimir Tumanovsky, Head coach of theFootballSchoolfor Children and Young People, has said.