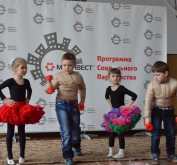 With the We Improve the Town competition of Metinvest many important social projects are realized in kindergartens, educational and medical institutions of Khartsyzsk in 2014. KHARTSYZSK PIPE PLANT funded 0.5 mln UAH for realization of the best initiatives of town residents.

At the beginning of last year 43 applications were submitted for consideration of Advisory Board of the We Improve the Town competition. 12 projects which had won funding from khartsyzsk pipe plant and Metinvest Group became winners. The training tutorials where listeners learned how to realize the ideas more correctly and more effectively were held.

Winners got into gear. By summer the majority of projects had passed the initial stage, activists were preparing to purchase the equipment, to make repair works, and were clearing the territory. But the amendments to plans of Khartsyzsk enthusiasts were made by the beginning of military operations in Donbas. A lot of organizations and institutes stopped working on the territory of the region. Because of that some projects were temporarily suspended. However, the desire to make the town better, optimism and aspiration to achieve the goals helped the heads to finish almost all the ideas successfully.

With financial support from Metinvest and thanks to efforts of activists there were new social objects in Khartsyzsk. In Svetlyachok preschool institution the unique sensory room (the room of psychological relief of kids) is opened, and the new modern equipment and exercise machines is bought for the sports hall of kindergarten called “Charivnytsya”. Welcome, the first grader!, the first educational center is opened in the regular school No. 3, and the school No. 6 has the studio of esthetic growth called Talents Fairy Show. Teachers of all schools in Khartsyzsk will master new computer technologies in specially equipped educational room. Pupils and town residents will be able to play sports on the territory of Khartsyzsk professional lyceum where reconstruction of basketball and volleyball grounds was made.

khartsyzsk pipe plant made the contribution to development of medicine. Now the group for preparation for pregnancy and childbirth called Waiting for a miracle is opened in the central town hospital of Khartsyzsk. Also the office on treatment and prevention of diseases of spine and locomotor system began to work.

We Improve the Town competition of Metinvest takes place in Khartsyzsk for the third year running and has become the good opportunity for enthusiasts to show activity and to realize their ideas. During this time the tens of important new social objects which continue to bring benefit to residents of Khartsyzsk have appeared.