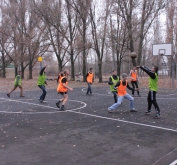 After continuous hostilities around Khartsyzsk the projects realized within the framework of the competition "We Improve the City", arranged by Metinvest Group, are renewed step by step in the town. The new street basketball and volleyball courts are open in Khartsyzsk specialized lyceum in spite of the forced delay. More than 250 students can train there.

The idea of old sports grounds complete modernization was cherished by the lyceum staff long before. The project implementation became possible thanks to Metinvest competition "We Improve the City". PJSC “KHARTSYZSK PIPE” extended a helping hand and allocated almost UAH 50 thous. for realization of this plan.

Because of the hostilities, the project was delayed till the autumn. However, the grounds were built up by the efforts of employees, students of the lyceum and concerned organizations of the town. The following modernization was conducted on the basketball field: a new asphalt covering from the fine-grained material was laid, fence was installed, basketball backboards were strengthened and fully renewed, lasting colour layout marking was made, sports equipment was purchased. The volleyball court was also put to rights: preparatory works were performed, fresh sand was brought, canvas supporters were reconstructed.

The students of the lyceum were excited about Sports Complex reconstruction. Basketball and volleyball grounds preparation for repair, leveling, clearing, backboards reconstruction, fence installation was made by students efforts.

"We wanted to have a modern Sports Complex long ago to play sports on the good new covering. I play basketball with pleasure at the physical education lessons and often come here with my friends after studies", Dmitriy Pozhuy, one of the students of the 5th group, has said.

The project became the serious contribution to the town infrastructure development. In the future the specialized lyceum is going to hold town-wide basketball and volleyball competitions there involving teams of enterprises and organizations of Khartsyzsk.

KHARTSYZSK PIPE PLANT has been cooperating with the lyceum for a long time, contributing to its development. In 2013 one more project was supported within the framework of Metinvest competition "We Improve the City". The field for indoor soccer was modernized in the educational establishment. A new soft covering was laid, football gates, fencing, benches for spectators and lighting were installed. Now the physical education lessons and tournaments between groups of students are held there.

"I would like to express my gratitude to KHARTSYZSK PIPE PLANT and METINVEST – they found the opportunity to allocate the grant for right sports goals. I would like to thank our students who participated actively in the process and did a lot of things with own hands. Now the town has new places for sports activities and this is great!", Director of the lyceum, Alexander Ilnitskiy, has said.

“Lean Enterprise” program is actively implemented in the main and auxiliary subdivisions of KHARTSYZSK PIPE. In 2013 the plant became the leader of “Lean enterprise” program implementation and headed the list among Ukrainian assets of Metinvest Group owing to its active position.

Upon the results of 2013, “KHARTSYZSK PIPE PLANT” was awarded the social diploma of I level, showing the stable growth dynamics of “Working environment” program at the company.

The top-priority goals in the social policy of “KHARTSYZSK PIPE PLANT” as a mainstay of the entire town are implementation of social programs and activities in education, health service and improvement of town infrastructure. In 2013 the volume of social investment of the company was approximately UAH 4 mln.

“KHARTSYZSK PIPE PLANT” is a part of Metallurgical Division of Metinvest Group.
METINVEST GROUP is a vertically integrated steel and mining group of companies, managing every link of the value chain, from mining and processing iron ore and coal to making and selling semi-finished and finished steel products. The Group comprises steel and mining production facilities located in Ukraine, Europe and the USA and has a sales network covering all key global markets. Metinvest Group is structured into two operating divisions: Metallurgical and Mining Divisions and has a strategic vision to become the leading vertically integrated steel producer in Europe, and to deliver sustainable growth and profitability resilient to business cycles, providing investors with returns at above the industry benchmarks. The Group generated US$2.9 billion of revenues and a 30% EBITDA margin for the first quarter of 2014.
The major shareholders of METINVEST B.V. (a holding company of Metinvest Group) are SCM Group (71.24%) and Smart Group (23.76%), partnering in the Company’s management.
METINVEST HOLDING, LLC is the managing company of Metinvest Group.