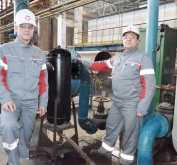 Metinvest Group’s Khartsyzsk Pipe (KhTW) conducted the quarterly contest of the best proposals on energy saving and rational use of fuel and energy resources. 13 projects were submitted for the review by the plant's committee in the 1st quarter 2014, whereby the enterprise will be able to save over UAH 770 000.

The 1st quarter’s best proposal was "Reduction of Operating Expenses of the Air Drying unit at Pipe Welding Shop #4", developed by the specialists of Pipe Welding Shop #4. Aleksandr Gnilitsky, foreman, Oleg Buzanov, electrical engineer, and Valeriy Luchin, deputy head of the shop on electrical equipment., They initiated this project and suggested to replace the existing heat exchanger for a separator (these devices are intended to dry the air and to remove the heavy particles from it). The new unit eliminated the transfer of the hydraulic impact, and does not require both the use of the process water and condensate removal in compressed air systems. The project will generate its ROI in 100 days after the commissioning. Expected effect of this project will comprise UAH 90 000 per year.

Oleg Buzanov, electrical engineer of Pipe Welding Shop #4: "We were happy to learn that our project was supported. Installation of the separator is really a useful development that can be taken over by colleagues at other enterprises with the similar production process. Our team developed this idea jointly as one team. The result: our proposal is the best this quarter.”

The project "Reduction of Energy Intensity of Compressed Air Generation by Screw Compressors" took the 2nd place. Aleksandr Nazarov, designing engineer, Dmitry Koshman, deputy head of the energy shop, Dmitry Gnatyuk, specialist in energy management, and Igor Rybin, section foreman in the energy shop, developed this project. The team's development is aimed at improving the energy efficiency of the compressor equipment: the frequency adjustment within the compressed air system was used for the first time in this project. This proposal was realized by the enterprise workers, and the economic effect amounts to over UAH 200 000 per year.

Aleksandr Nazarov, designing engineer of design and construction works department at KhTW: "We ensured a soft supply of the power to the compressor instead of a stepped start, i.e. we installed a frequency converter on one of the compressors. The saving amounted to about 30% against the capacity of a single compressor, or 200 kW".

The project of specialists from Pipe Welding Shop #4 – Dmitry Shevchenko, batch plater, Aleksandr Manuylenko, deputy head of the shop in production, Sergey Chuprina, head of the production and dispatching office, and Sergey Gubanov, maintenance foreman – took the 3rd place. Their proposal "Improving the operation of the positioning system by reducing the air consumption for photo-grating" allows reducing compressed air consumption 100 times. The economic effect makes about UAH 75 000 per year.

Aleksandr Manuylenko, deputy head of Pipe Welding Shop #4: "Our daily work includes detecting causes of energy losses and developing measures aimed at their maximal optimization. When the management pays attention to the ideas, which benefit the enterprise, we become motivated to move on.

"Now the enterprise specialists look at production from a new perspective: they try to find bottlenecks and to introduce improvements. As a result, the initiatives of our professionals have been many times recognized the best among Metinvest's enterprises. Participation of the plant workers in resolving technical problems, related to the rational use of electricity, gas and water, improves the general qualification of our staff and increases the competitive ability of our plant as well," - said Pavel Uzbek, KhTW's General Director.

Metinvest Group is a vertically integrated group of steel and mining companies that manages every link of the value chain, from mining and processing iron ore and coal to making and selling semi-finished and finished steel products. It has steel and mining production facilities in Ukraine, Europe and the US, as well as a sales network covering all key global markets. Its strategic vision to become the leading vertically integrated steel producer in Europe, delivering sustainable growth and profitability resilient to business cycles and providing investors with returns above industry benchmarks. The Group reported revenue of USD 12.8 billion and an EBITDA margin of 18% in 2013. The major shareholders of Metinvest B.V. (the holding company for Metinvest Group) are SCM Group (71.25%) and Smart-Holding (23.75%), which partner in the Group’s management. Metinvest Holding, LLC is the management company of Metinvest Group.