Metinvest kicks off its "We Improve the City" competition in Khartsyzsk 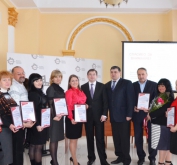 The "We Improve the City" competition began to receive applications social projects in Khartsyzsk. The best initiatives of public organizations, municipal offices and local residents will receive financial support from Khartsyzsk Pipe Plant and Metinvest Group.

"We Improve the City" was presented on Friday in the city's Palace of Culture to over 150 people who want to make life in Khartsyzsk better and more comfortable. All participants were welcomed by Khartsyzsk Pipe General Director Pavel Uzbek and Mayor Valeriy Dubovoy.

This is the third year for the competition and it has become a tradition in Khartsyzsk. Public organizations and initiative groups in the city filed 35 applications in 2013. Ten winning projects received over UAH 350,000 in financial support from Khartsyzsk Pipe and Metinvest.

"I want to thank all participants of the competition. By your example, you have shown that a good idea can become a reality. We are looking forward to new interesting and creative projects from you that will be beneficial for the city. Khartsyzsk Pipe and Metinvest will be happy to support the best from you. I am sure that together we will make life in Khartsyzsk more comfortable!" said Uzbek.

According to the initiators of "We Improve the City" projects, the competition is a good opportunity for city residents to be active and to bring their ideas to life.

"Victory in the competition and the support of Metinvest Group's Khartsyzsk Pipe brought a unique haloroom (salt room) into existence. It is a therapy room where city residents can receive a comprehensive therapy for respiratory diseases for free. According to our preliminary estimates, this room can help reduce the asthma and allergy rate by 10-15%," said NAME?, chief doctor of the Primary Health Care Center.

Last year, the "We Improve the City" competition helped implement other important projects. The first Adaptation Center for Children with Developmental Needs (Down syndrome and autism) was opened in the city. The following activities were supported by Metinvest in the remote Energetic residential area: a modern playground, Rainbow, was built for children; the façade of the Cinderella daycare was painted with bright colours, a sports playground and football field were equipped for students of a specialty school of Khartsyzsk, new boards were installed in the History Museum of Khartsyzsk, a stage with an auditorium and dressing room at the Debut theatre studio were repaired. The general director of Khartsyzsk Pipe and city mayor of Khartsyzsk rewarded project team members with recognition certificates for their personal involvement and contribution to the city's development.

"'We Improve the City' is essential and the right thing to do. I am happy for our city and want to thank Metinvest and Khartsyzsk Pipe, which is not only the city's main employer, but also a socially minded enterprise. I wish success to everyone who wants to participate in the competition this year. Your victory will be a victory for the residents of Khartsyzsk," said Dubovoy.

With Metinvest's help, the people of Khartsyzsk will be able to deliver even more projects in 2014.
The grant fund for "We Improve the City" grew to UAH 500,000. And the potential funds that can be allocated to each project was doubled to UAH 100,000.

Priority areas for the competition in 2014 include land improvement, business environment development and the establishment of new workplaces. Initiatives that promote sports and healthy lifestyles or support socially unprotected people are also welcomed.

Applicants can include public organizations, the Khartsyzsk City Council and its subdivisions, utility institutions or city residents.  People from Khartsyzsk who care about their city can get professional consultations from Khartsyzsk Pipe and receive training on the basics of project management.