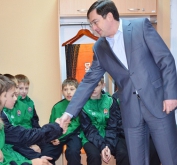 Metinvest Group's Khartsyzsk Pipe financed repairs to the amenities at the city's stadium. The work was performed as part of the social partnership agreement between the city and the enterprise.

Thanks to the pipe makers, major overhauls were made to the changing rooms and showers in the administration complex of the stadium. Communication lines and floors were completely replaced, electric heating and new bathroom fixtures were installed, and new lockers and mirrors were purchased. The investments totalled UAH 250,000.

"There were not no favorable conditions for young athletes here: in recent years there were problems with electricity and water supply, the temperature did not comply with sanitary regulations, and the restrooms did not work," said Vladimir Tumanovskiy, head coach of the Children and Youth Football School at Khartsyzsk Pipe. "It became much warmer and convenient after the repairs. Every day more than 30 children use the facility. Now, trainings will be more comfortable for them."
There had not been a major overhaul to the amenities since the stadium was opened 40 years ago. That is why Khartsyzsk Pipe decided to renovate several rooms at the same time: changing room, restrooms, showers and rooms for coaches and guards.

"Khartsyzsk Pipe does a lot to develop children's sports," said Pavel Uzbek, general director of Khartsyzsk Pipe. "We support the students of the enterprise's football school: we provide them with equipment and sports clothes, and finance their trips to football championships. Now the changing rooms and the showers at the stadium have been renovated. I am sure that our children will keep making us happy with their victories.