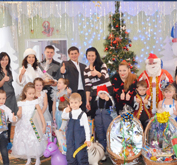 On St. Nicholas Day, the youth organization of Metinvest Group’s Khartsyzsk Pipe held holiday celebrations for kindergarten children. Children from all of Khartsyzsk’s 12 kindergartens participated, about 3,000 children and received gifts.

Representatives of the youth organization of Metinvest Group’s Khartsyzsk Pipe, which is headed by General Director Pavel Uzbek, visited all of the Khartsyzsk kindergartens and the city center for the social and psychological rehabilitation of children. The children received developmental games, large fruit and candy baskets, building kits, puppet theaters, toy cars, dolls and more.

Almost every kindergarten organized a small performance for the guests from Khartsyzsk Pipe. Children sang New Year songs, recited poetry, and danced in circles. After the celebrations, the children were happy to talk with the pipe-makers and took pictures with them near their holiday trees.

“These are active people who not only work well, but also help the city. We wish them from the bottom of our hearts happiness, joy and optimism. Let all of their dreams come true!”