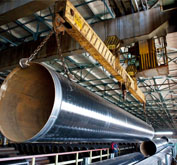 Khartsyzsk Pipe is a supplier of large diameter pipes for all participants of the transnational Central Asia-China gas pipeline project. Over one million pipes have been shipped for the Uzbekistan-China and Kazakhstan-China sections and the Beineu Bozoi-Shymkent gas pipeline.

Khartsyzsk Pipe's pipes will also be used for the construction of the 'C' branch of the Central Asia-China gas pipeline. This branch goes over the territory of Uzbekistan, Kazakhstan and Turkmenistan, and is designed to increase the transit of gas from Central Asia to China. It extends for 1,840 km. The design capacity of the 'C' branch will be 25 billion m3 of gas per year. It is scheduled to be commissioned in 2014.

"This is yet another example of Khartsyzsk Pipe delivering an important order in good quality and on time. The compliance of our products with all modern requirements has been recognized at an international level. At the same time, we understand that the exploration of hard-to-reach deposits in the future will require fundamentally new pipes that would be resistant to severe temperature fluctuations, high working pressure and the corrosion on transported media. The experts of Khartsyzsk Pipe are keeping their eye on innovations in the production of welded pipes and are ready to put them into production within the shortest possible period of time according to customer requirements," said Pavel Uzbek, Khartsyzsk Pipe's general director.

Khartsyzsk Pipe is one of the world's largest producers of large diameter pipes. The plant manufactures over 500 standard sizes of longitudinal submerged arc welded large diameter pipes for mainline oil and gas pipelines and heating mains. Khartsyzsk Pipe was the first among Ukrainian pipe manufacturer to receive a certificate of compliance for its welding procedures with the requirements of international standard ISO 3834-2. The quality of products manufactured by Khartsyzsk Pipe has been recognized with 12 compliance certificates from institutes and laboratories from all over the world - the USA, Canada, Poland, Russia, France, Brazil and more. This year alone Khartsyzsk Pipe was audited by Zetom, the Polish research and certification institute; SAI Global (Canada); TUV Nord (Germany); and Russian Register (Russia).