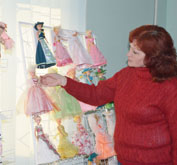 Metinvest Group's Khartsyzsk Pipe sponsored the acquisition of mobile equipment for the City of Khartsyzsk's History Museum. The new exhibition showcases and display stands were purchased as part of Metinvest's "We Improve the City" social projects.

Khartsyzsk Pipe provided the City's History Museum with six specialized showcases, a folding table and a sidewalk sign. The new equipment will allow for conducting exhibitions in schools, displaying exhibits at remote locations and telling about Khartsyzsk's rich culture outside of the city. The museum plans to arrange an exhibition of handiwork made by craftsmen from the Vdokhnoveniye craftsman studio. The Studio operates out of the City's History Museum and is used by more than 60 craftsmen for beadweaving, embroidery, origami, tapestry, wood engraving, and more.

"We would like to thank the management of Metinvest Group's Khartsyzsk Pipe for their concern about issues faced by institutions such as museums. We did need these exhibition showcases. Now, we can take exhibitions to a higher level. At the end of the day, Khartsyzsk residents will benefit from this," said Irina Bikmulina, director of the museum.

The City's History Museum is the only state museum in Khartsyzsk. The museum opened its doors to visitors in 1967. The institution collects, studies, conserves, and exhibits artifacts of historical and cultural importance.