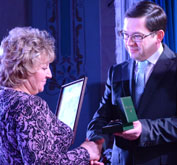 Khartsyzsk Pipe was the USSR's first large diameter pipe producer and it was the first in the CIS to produce pipes with external and internal anti-corrosive coatings.

Continuous investments to modernization and the implementation of lean enterprise principles helped the plant to survive the crisis and even strengthen its market positions. The plant’s products have been recognized internationally for their quality and have been used in more than 30 gas and oil pipelines.

The plant's history includes several generations of steel workers. On the anniversary, pipe workers with long tenures received letters of gratitude from the plant's administration and the enterprise's trade union committee. At an evening celebration, a film was shown about the plant, followed by a performance by popular entertainers.

"The success of our plant is the achievement of our entire team. Without the talent and experience of our workers and office staff, our experts and managers, the plant could not have achieved such good results. It is only because of our joint effort that Khartsyzsk Pipe Plant is today a sector leader and we can be confident about the future."