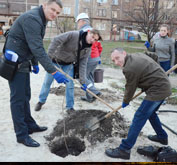 Khartsyzsk Pipe Plant workers' initiative to plant trees was a part of a "Let's Make our City Comfortable!" event that coincided with the 15th anniversary of the plant.

The young maple trees were planted in the Yubileynyi residential area near 50 Chumak Street.

Khartsyzsk Pipe opened a playground for children on Chumak Street this August.

“The city of Khartsyzsk and Khartsyzsk Pipe Plant have been together for 115 years, said Pavel Uzbek,” Khartsyzsk Pipe's general director. “The plant has tried to take care of the city over the years. We have created jobs and paid salaries and taxes to the budget and have done all we can for the city to grow and develop. Every day we give part of our soul in this process as we are truly concerned about the destiny of each resident of Khartsyzsk. Today, through this initiative by Khartsyzsk Pipe and Metinvest, we joined with residents to make our hometown clean and comfortable."

The development of social infrastructure is one of priority areas where Metinvest has focused on helping cities where it operates. Khartsyzsk Pipe is working on a number of projects in 2013 aimed at urban redevelopment and the creation of comfortable living conditions for residents. It has constructed new public transport stops and playgrounds. The plant’s workers and family members have been regular participants in volunteer environmental initiatives and clean-up events.

Metinvest Group is a vertically integrated group of steel and mining companies that manages every link of the value chain, from mining and processing iron ore and coal to making and selling semi-finished and finished steel products. It has steel and mining production facilities in Ukraine, Europe and the US, as well as a sales network covering all key global markets. Its strategic vision to become the leading vertically integrated steel producer in Europe, delivering sustainable growth and profitability resilient to business cycles and providing investors with returns above industry benchmarks.

The Group reported revenue of USD 3.1 billion and an EBITDA margin of 15% in the first quarter of 2013.

The major shareholders of Metinvest B.V. (the holding company for Metinvest Group) are SCM Group (71.25%) and Smart-Holding (23.75%), which partner in the Group’s management.

Metinvest Holding, LLC is the management company of Metinvest Group.