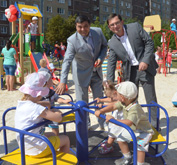 On August, 23 the opening ceremony of a new sports playground took place in Khartsyzsk. This gift to children was made by KHARTSYZSK PIPE PLANT of Metinvest Group. The project was realized as part of the program for social partnership between the plant and the town.

The large modern playground was set by KHARTSYZSK PIPE PLANT in the yard of the multiple-occupancy buildings in Chumak Street at parents demand. Until recently this district didn’t have a well-appointed playground for children. Now the waste land that was used as a parking area by motorists became “a little town for children”.

“This ground is like an island of happiness for children. It gives joy to them,” Alla Razenkova, the resident of the town, shared her impressions. “That’s why I would like to thank the management of KHARTSYZSK PIPE PLANT and Metinvest which help the town and give a wonderful child-hood to our boys and girls”.

The opening of the playground was held in a festive atmosphere with balloons and an interesting entertainment program for children. A symbolic red ribbon at the new object was cut by Pavel Uzbek, Acting Director General of KHARTSYZSK PIPE, and Valeriy Dubovoy, the Mayor of the town.

"Construction of this playground is not a singular event. We and KHARTSYZSK PIPE PLANT built a good few of such objects in the town and we’ll continue this glorious tradition in the future," - said the Mayor.

Each element of the minitown – swings, merries-go-round, gymnastics complexes "Yunior" and "Malysh" - was produced by the special order of KHARTSYZSK PIPE PLANT. The complex meets all modern environmental requirements and safety rules. In addition to new multicolored sliding boards and sandpits the litter baskets and comfortable benches were set on the playground. Everything was done thoroughly and with love.

"The greatest happiness is the happiness of children”, Pavel Uzbek, Acting Director General of KHARTSYZSK PIPE, said. “That’s why KHARTSYZSK PIPE PLANT and Metinvest company set themselves a task to do everything to make the childhood of young residents of Khartsyzsk as bright and happy as possible. And we confirm our words with real actions. With the active sup-port of the plant child day care centers and schools are repaired, new parks and squares are laid out, sport for children is developed, playgrounds are built. Laugh and smiles of children is the best gratitude for us! "

This year KHARTSYZSK PIPE PLANT plans to invest more than UAH 4 mln. to the town development as part of the program for social partnership.

KHARTSYZSK PIPE PLANT is the largest company in Ukraine and one of the largest enterprises in Europe for pipes manufacture. The company manufactures longitudinal SAW large diameter pipes (508-1422 mm in diameter) with external anticorrosion and internal anticorrosion or flow coating for main oil and gas pipelines. Plant’s facilities permit to manufacture more than 1.3 mln. tons of pipes per year, including 700 thous. tons of coated pipes.

The integrated Management System ensuring stable high quality of the products to the customers is functioning at KHARTSYZSK PIPE PLANT. ISO 9001, ISO 14001, OHSAS 18001, API Spec Q1, DSTU ISO 9001, GOST R ISO 9001, STO Gazprom 9001 create its foundation. Products of the plant are certified according to API, EN standards and in the national system UkrSEPRO. Welding processes are certified as per ISO 3834-2.

More than 630 thous. tons of large diameter pipes were produced at KHARTSYZSK PIPE PLANT in 2011 that became the record over the last 20 years.

The top-priority goals in the social policy of KHARTSYZSK PIPE PLANT as a mainstay of the entire town are implementation of social programs and activities in education, health service and improvement of town infrastructure. In 2011 the volume of social investment of the company was more than UAH 1.3 mln.

KHARTSYZSK PIPE PLANT is a part of Metallurgical Division of Metinvest Group.

METINVEST GROUP is a vertically integrated steel and mining group of companies, managing every link of the value chain, from mining and processing iron ore and coal to making and selling semi-finished and finished steel products. The Group comprises steel and mining production facilities located in Ukraine, Europe and the USA and has a sales network covering all key global markets. Metinvest Group is structured into two operating divisions: Metallurgical and Mining Divisions and has a strategic vision to become the leading vertically integrated steel producer in Europe, and deliver sustainable growth and profitability resilient to business cycles, providing investors with returns above the industry benchmarks. For the 12 months ended 31 December 2012, the Group reported revenues of US$12.6 billion and an EBITDA margin of 16%.

The major shareholders of METINVEST B.V. (the holding company) are SCM Group (71.25%) and Smart-Holding (23.75%), partnering in the Company’s management.