Khartsyzsk summed up the results of “We improved the town” contest 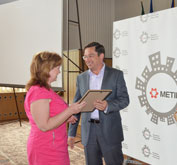 Metinvest summed up the social projects contest «We improved the town» in Khartsyzsk. The fi-nalists, included ten social projects from town dwellers, receive financial support from KHARTSYZSK PIPE PLANT in the amount of 350 thousand UAH within 2013.

Awarding took place in the house of Municipal Executive Committee, where representatives of town community, honored guests and creators of all projects submitted for “We improved the town” contest got together. The winners were awarded with commemorative diplomas and money certificates. Awarding ceremony was conducted by Pavel Uzbek, Acting Director General of KHARTSYZSK PIPE PLANT, and Igor Kolodii, Secretary of Khartsyzsk Town Council.

“This contest gave our town dwellers an opportunity to show their activeness and obtain support of KHARTSYZSK PIPE PLANT in implementation of their ideas, - Igor Kolodii, Secretary of Khartsyzsk Town Council, mentioned. – On behalf of town community I’d like to say thank you to KHARTSYZSK PIPA PLANT and Metinvest Company for the given opportunity to Khartsyzsk dwellers to turn their projects into reality and make our town more comfortable and prosperous”.

The project called Healthy people mean prosperous town covers the development of Health Centre, which recreates the microclimate of salt and karst caves as part of Primary Health Centre. In special salt chamber people with bronchial asthma and allergy can receive the nondrug treatment.

Young actors of little theatre “Debut” will implement the project called Dreams of Melpomene. The reconstruction and design of the scene, renewal of armchairs in the hall, acquisition of equipment for make-up room and of additional light fittings are planned to be conducted here.

As a result of “We improved the town” contest the town society of disabled people will be able to carry out project called Solarbabies. Within the Project the acquisition of special-purpose equipment and decor of study space for children with Down’s disease and autism are planned to be done.

Also within the projects the modern sport ground with football field and race tracks will be built on the territory of Khartsyzsk Vocational School this year. In the park of Culture Palace of KHARTSYZSK PIPE benches, swings and sandpits will be set, and the children’s play ground will be opened in the most densely populated area of the town called Energetic.

“KHARTSYZSK PIPE PLANT, Metinvest Company in cooperation with town authorities conduct “We improve the town” contest second time and it’s become a tradition, – Pavel Uzbek, Acting Director General of KHARTSYZSK PIPE PLANT, underlined. It’s gratefully that the activeness of dwellers increases and the amount of requests grows. It means that dwellers of Khartsyzsk didn’t remain indifferent and desire to make the life in town better and more comfortable. And KHARTSYZSK PIPE PLANT always ready to support dwellers in realization of plans aimed to gain the welfare and living standards in the town”.

PUBLIC JOINT STOCK COMPANY “KHARTSYZSK PIPE PLANT” is one of the largest enterprises in the CIS manufacturing longitudinal SAW large diameter pipes (508-1422 mm in diameter) with external anticorrosion and internal anticorrosion or flow coating for main oil and gas pipelines. Plant’s facilities permit to manufacture more than 1.0 mln. tons of pipes per year, including 700 thous. tons of coated pipes.

Priority directions of social policy of KHARTSYZSK PLANT as town-forming enterprise are of social programs and activities in the spheres of education, health, improving urban infrastructure. In 2011, the amount of social investments of the Enterprise totaled more than 1.3 million. UAH.