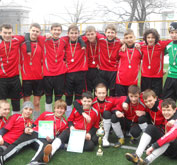 Football School for Children and Young People of PJSC “KHARTSYZK PIPE PLANT” of Metinvest Group has reached the age of two. For its birthday the School got significant and deserved gift that is the “silver” victory in the International Junior Football Tourna-ment in memory of V.B. Liventsev.

Playing with teams from Chervony Donets, Moscow and Mariupol, Khartsyzsk players proved to be stronger, but in the matches with sportsmen from Kharkov and Belaya Tserkov, they gave te victory to competitors. In te end our young sportsmen came in second in the overall ranking. Top position occupied team from Belaya Tserkov, and the third place got the team from Chervony Donets.

Trainees of the School were awarded with medals, diploma and the Prize as winners of the tournaments. Vadim Postnikov obtained the diploma as the best midfielder within this competition.

“Such tournaments are the invaluable experience for young sportsmen. To demonstrate it, let’s remember the event of 2012. Football players became Metinvest Cup holders. The oftener teenagers take part in competitions of such level, the more self-confident they become. You know, none training will replace the game with formidable competitor”, - Victoria Liashenko, Football Development for Children and Young People Program Coordinator in Khartsyzsk, comments.

Host cities of Metinvest Groups implement successfully the employee benefit Football Development for Children and Young People Program. The aim of it is to improve the value of sport and sport culture among children and teenagers, motivate talented youth and develop the potential.

PUBLIC JOINT STOCK COMPANY “KHARTSYZSK PIPE PLANT” is one of the largest enterprises in the CIS manufacturing longitudinal SAW large diameter pipes (508-1422 mm in diameter) with external anticorrosion and internal anticorrosion or flow coating for main oil and gas pipelines. Plant’s facilities permit to manufacture 1.3  mln. tons of pipes per year, including about 700 thous. tons of coated pipes.

“KHARTSYZSK PIPE PLANT” became the first company among Ukrainian enterprises of Metinvest Group which started to            implement “Lean enterprise” program in September, 2010 and obtained tangible results. “KHARTSYZSK PIPE” is ready for      communication and is excited to share accumulated experience. Thereby, a lot of delegates, including foreign ones, visit the     company.

In 2011, as a result of cooperation of technical specialists from “KHARTSYZSK PIPE”, AZOVSTAL IRON & STEEL WORKS and the Central Research and Development Institute for Ferrous Metallurgy, PJSC “KHARTSYZSK PIPE” and AZOVSTAL IRON & STEEL WORKS acquired two patents for the invention “The method of manufacture of steel high-strength electric welded double seam and single seam large diameter pipes for main pipelines”.

In January, 2012 the results of fulfilment of collective agreements at the enterprises of Khartsyzsk during 2011 were drawn up.            PJSC “KHARTSYZSK PIPE” was pronounced the winner among the companies of metallurgical industry.

In 2010 “Khartsyzsk Pipe Plant” defined a number of top-priority goals in the social policy: development and implementation of various social programs and activities in education, assistance in rendering well competent medical services to citizens by the health care institutions, improvement of town infrastructure and so on. Annually “Khartsyzsk Pipe” concludes the agreement on social and economic cooperation with Khartsyzsk Town Council. Partnership between the plant and the town is a systematic and consistent one and it is aimed to achievement of long-term and significant result in social and economic development of the town.

During 2011-2012 corporate social programs, initiated by Metinvest Group, were realized in Khartsyzsk, namely: “The world of opportunity” (the competition of young painters “The Colors of Ore, Coal and Metal”), “Children football development”,                    “We improve the city”, “Healthy Environment is Everybody’s Business”. “Khartsyzsk PIPE PLANT” is a part of Metallurgical Division of Metinvest Group.

METINVEST GROUP is a vertically integrated steel and mining group of companies, managing every link of the value chain, from mining and processing iron ore and coal to making and selling semi-finished and finished steel products. The Group comprises steel and mining production facilities located in Ukraine, Europe and the USA and has a sales network covering all key global markets. Metinvest Group is structured into two operating divisions: Metallurgical and Mining Divisions and has a strategic vision to become the leading vertically integrated steel producer in Europe, and to deliver sustainable growth and profitability resilient to business cycles, providing investors with returns at above the industry benchmarks. The Group generated US$6.74 billion of            revenues and a 16% EBITDA margin for the first half of 2012.