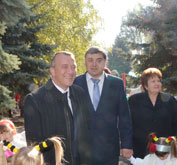 Khartsyzsk Pipe Plant within the framework of realization of the corporate social program of Metinvest "Our City by Our Hands” supported initiative of preschool establishment and distinguished about UAH 23 thousands for the realization of project "Children and plants are Earth decoration". The total worth of project made more than UAH 50 thousand.

Realization of ecological project in preschool establishment improved the environment of territory of kindergarten and gave possibility to under-fives to adjoin with bases of forming of ecological culture from early age.

Ecological path appeared in kindergarten "Raduga" as a result of introduction of project.  Flowerbeds are broken with green plantations, miniature sculptures corresponding to the tendencies of modern landscape architecture are set, seating areas are equipped by benches and trash cans there. Also artificial water body named "In the guests of "Drop"  and a path "Health", allowing to conduct health measures on the prophylaxis of flatfoot of children, appeared  in a garden.

"Ecological education is impossible without proper development of children’s interest to nature, and one of terms which is necessary for encouragement of such interest is the equipped with modern amenities territory of kindergarten, - comments the director of preschool establishment Ljudmila Prigara. - Forming of ecological culture is nonseparable related to forming of healthy way of life".

"Support of ecological projects is important part of caring about an environment in industrial city, - General Director of KHARZYZSK PIPE Iurii Zinchenko marked, - Metinvest Group is ready in future to finance the projects sent to forming of ecological culture not only of children but also of habitants of city".