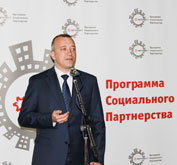 On April, 18 more than 100 habitants of Khartsyzsk visited teaching seminar that took place within the framework of realization of the social program of Metinvest Group "We Improve the City". Representatives of KHARTSYZSK PIPE at the head with the general director Iurii Zinchenko were the organizers of the seminar. They explained the rules of participation in the project which the company conducts in nine cities of Ukraine.