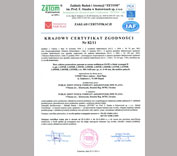 KHARTSYZSK PIPE PLANT, the part of Metinvest Group, has successfully passed the recertification audit on confirmation of capability of KHARTSYZSK PIPE PLANT to manufacture pipes in accordance with the European norm PN-EN 10208-2:2011 “Steel pipes for pipelines for combustible fluids - Technical delivery conditions - Part 2: Pipes of requirement class B”. The period of validity of the license was extended till November, 2016.

On the base of positive results of the recertification audit and tests of products in the research and measuring laboratory of “ZETOM”, laboratory of metallography and heat treatment of “ZDT-GLIMAG” LLC, accredited by Polish Centre for Accreditation, the plant was issued the renewed Certificate No 82/11, confirming the compliance of pipes 406-1420 mm in diameter, wall thickness of 6-40 mm (manufactured from steel grade up to L555MB inclusively)  with the requirements of PN-EN 10208-2:2011 standard.

"The Certificate of compliance of our products with the requirements of PN-EN 10208-2:2011 gives an opportunity to METINVEST HOLDING to participate in tenders held by the European companies and supply large diameter pipes to the countries of the European Union. The document  allows us to keep confidence of the customers and partners and contributes to the further growth of authority of KHARTSYZSK PIPE PLANT of Metinvest Group as a manufacturer of high quality products ", Iurii Zinchenko, Director General of KHARTSYZSK PIPE, has said.