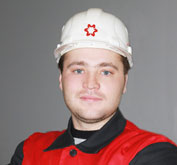 The competition "The best young welder of pipes at the mill at PJSC KHARTSYZSK PIPE - 2011" was attended by 21 young experts of the profession of electric welding pipes shop № 2. Competitions were held in two phases.They demanded the young welders` knowledge of the theory and practice. All the factors were evaluated into account: the observance of all rules and requirements of regulatory documents on labour protection and safety, the theoretical knowledges and ability to apply their knowledge in practice. For the first time at the contest the conditions were not simulated, everything occurred during the real work. Everyone did his work in the workplace. Practice needs such high standards as a good welding quality - it is 70% successful completion of the pipe. Those who took the first, second and third places were awarded with certificates and cash prizes. Thus, as for the results of the competition, the 1st place went to Denis Yashechkin by performing 179 welding pipes without any defects. The 2nd place - Sergey Miroshnichenko - 173 pipes, three of which required being repaired by welding. The 3rd place - Alexander Pilipenko, his practical result - 185 pipes, six of which had minor defects.

"Through competitions we are developing a business and personal qualities of our employees and help them to open their potential, to express themselves, share their experiences with each other, to build their skills - the General Director of PJSC KHARTSYZSK PIPE Yuriy Zinchenko said. - Educating professionals is our duty, because KHARTSYZSK PIPE development and the quality of our products depend of the human capacity. "